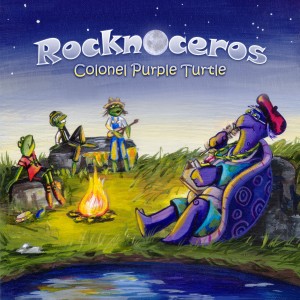 About: As almost every family with youngsters in the Washington, DC area knows, Rocknoceros (pronounced like rhinoceros) is three guys: Coach Cotton, Williebob, and Boogie Woogie Bennie. The theme of Colonel Purple Turtle is one of friendship and working together, a subject close to the hearts of the Rocknoceros bandmates, who have been best friends since they were children. Colonel Purple Turtle reflects their abiding trust in each other and their desire to share a message of camaraderie through song and story.

Rocknoceros is fun – very fun! This is the kind of cd that encourages kids to be kids. The music and lyrics are playful and the kids may even learn a thing or two as they sing and dance along.

There are 19 tracks on the cd. You can tell by the titles that Rocknoceros knows how to have fun.

They have lots of videos available online. Some are animated and some are live action. All of them are fun!

If you happen to live in the DC area, it looks like their live shows are quite entertaining!

Giveaway ends September 16, 2011 at 8pm Pacific Time. Giveaway is open for residents of the US & Canada only. No purchase necessary – void where prohibited by law. Winner will have 48 hours to respond to email notification with shipping info and claim prize – if no response, another winner will be chosen . Subject to the official rules. Disclaimer/Disclosure: Sample and prize provided by sponsor.