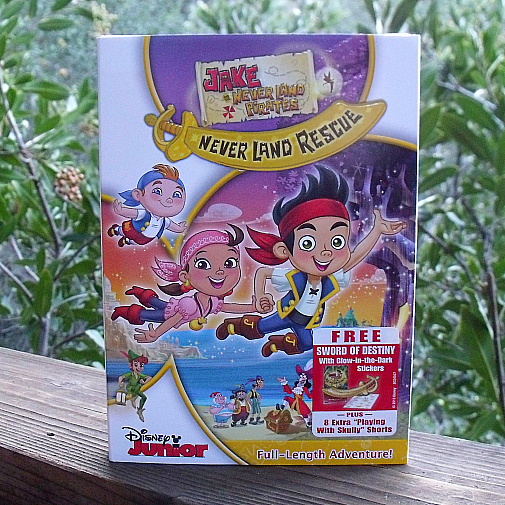 Yo, Ho! Yo, Ho! Jake’s Never Land Rescue is a must-have for Jake and the Never Land Pirates fans!

It’s a full-length feature, which means kids get more Jake than the usual episodes AND there is something, actually someONE, who makes this movie extra special.

This is the first time that Tink has made an appearance in this series and she is just as magically wonderful as expected! I’m happy to see that she has joined Jake and his crew to help guide them on this adventure.

Synopsis: ” In “Jake and the Never Land Pirates: Never Land Rescue,” Jake embarks on his most heroic mission ever as the magic of Never Land begins to disappear just as the ancient Forever Tree seems to be fading away.  After a mysterious figure known as “The Guardian” arrives to explain that only the pirate who truly believes in himself can save Never Land from vanishing completely, Jake must break off from the rest of his crew and go alone on a mission to save the Forever Tree, the source of magic throughout all of Never Land.  Guiding Jake on his quest is Tinker Bell, who makes her first-ever appearance in the series.”

In addition to the feature, there are bonus episodes, a bonus and a free gift inside the DVD case: