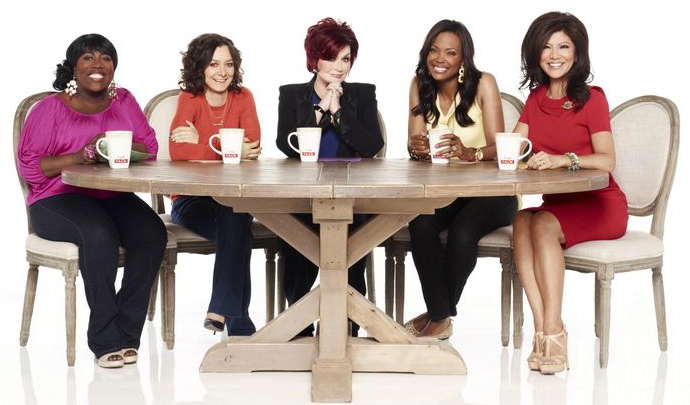 Just like any group of friends, each of these women has their own opinions. They don’t always agree, but they respect each other. They also know how to laugh at themselves and at others.

Viewers are encouraged to participate with the conversation on Twitter using the hashtag #TweetTheTalk . Even if you’re watching the show at home alone, you can jump right in and join the others who are tweeting.

I’ve had the pleasure of attending the show several times. The other times I’ve been with a group of bloggers and have tried to tweet from my phone. As anyone who knows me will attest, I am not exactly skilled at typing on my phone. This time I was the only blogger there and brought a laptop, since I am quite skilled at typing when I have a full sized keyboard. I had an absolutely fabulous time tweeting during the show. I had conversations with people I already know and met some new fans of the show, too.

One of the benefits of being in the studio is that there are often gifts for the audience based on what was featured on the show that day. Sometimes it’s something small. Sometimes it’s a whole bunch of amazing gifts. This happened to be one of those amazing days since they were featuring last minute gift ideas for Valentine’s Day. There were gift certificates for Arhaus Jewels, Sabatino & Co. and Parisa USA along with other gift items.

Those of you at home can enter to win products that have been featured on the show. You can check their website for the current list of easy to enter giveaways from The Talk.

The Talk is a fun show to be a part of. If you’re going to be in the Los Angeles area, I’d highly recommend attending a taping. If you’re watching at home, this is one time when I’d recommend tweeting while watching the show. It isn’t distracting and actually makes the show more fun and interactive.