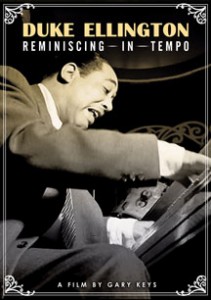 Description: Filmmaker Gary Keys crafts a compelling tribute to late jazz icon Duke Ellington in this companion piece to Keys’ 1980 documentary Memories of Duke, which combines unseen clips captured during the famed pianist and bandleader’s 1968 Mexican tour with footage and interviews shot at sister Ruth Ellington’s annual birthday celebration. Though fans know well that the man known as Duke never celebrated his own birthday, ever since his death in 1974 sister Ruth has made up for lost time by hosting an annual gathering in which friends, family, and former bandmates all gather for a yearly birthday bull session. In addition to offering a closer look at the beloved jazz master, this lovingly-crafted documentary also features an original suite that was never commercially recorded.

This documentary has such a warm feeling. Duke Ellington was loved personally and admired professionally by the people who knew him best. It was nice to be able to sit in on the personal conversations as people remembered his career and personal life. Music and the social structure of our country have come a long way since Duke’s career first began.

The music is amazing and his influence lives on.

Giveaway ends May 26, 2011 at 8pm Pacific Time. Giveaway is open for residents of the US & Canada only. No purchase necessary – void where prohibited by law. Winner will have 48 hours to respond to email notification with shipping info and claim prize – if no response, another winner will be chosen . Subject to the official rules. Disclaimer/Disclosure: Sample and prize provided by sponsor.